Sydney FC’s 2018–19 season ended twice. With a bang, when Reza Ghoochannejhad blasted home the Championship-winning penalty in Perth, and then with a whimper, as Sydney FC’s youngest ever side couldn’t avoid suffering the club’s heaviest ever ACL defeat in front of our smallest ever ACL home crowd two days later.

And after the season ends, it’s time for the awards. At the Sky Blue Ball, Brandon O'Neill and Teresa Polias won the Player of the Year awards for their respective sides. Those awards are decided by “a select panel of former Socceroo captains football and coaching staff”, but the club also lets the supporters have a say, in voting for the Members’ Player of the Year awards. This season, they were won by Rhyan Grant and Elizabeth Ralston.1

But there is one other prestigious award voted by the fans. And though I’m obviously biased, I think the SFCU Player of the Season award has the best voting system of them all. For anyone unfamiliar, after each Sydney FC match, members of the SFCU fan’s forum2 can allocate six points to players who appeared in the match, in any way they see fit.3 The top vote-winner for a match is awarded 3 points to their season tally, with second- and third-places getting 2 and 1 points respectively.4 The player with the highest tally at the end of the season is our winner.

The voting system has two features: individual voters have flexibility in how they express the relative performances of players on the park in a particular match, but every match counts equally at the end of the season.5

2018–19 was the 8th season of SFCU Player of the Season voting, and as is tradition, the winner is announced after the SFCU End of Season Fundraiser. So here goes…

This award would not exist without the voters, so I want to start by thanking everyone who submitted votes this season. We had 99 unique voters across the 40 competitive matches. Special thanks go to the regulars: we had one voter who voted in every single match, and another nine who gave out points in at least 30 games.

Overall, unfortunately votes were down again on previous seasons. This season had (marginally) the lowest number of average votes since the award began. This is down nearly two-thirds from the heady days of 2012–13. 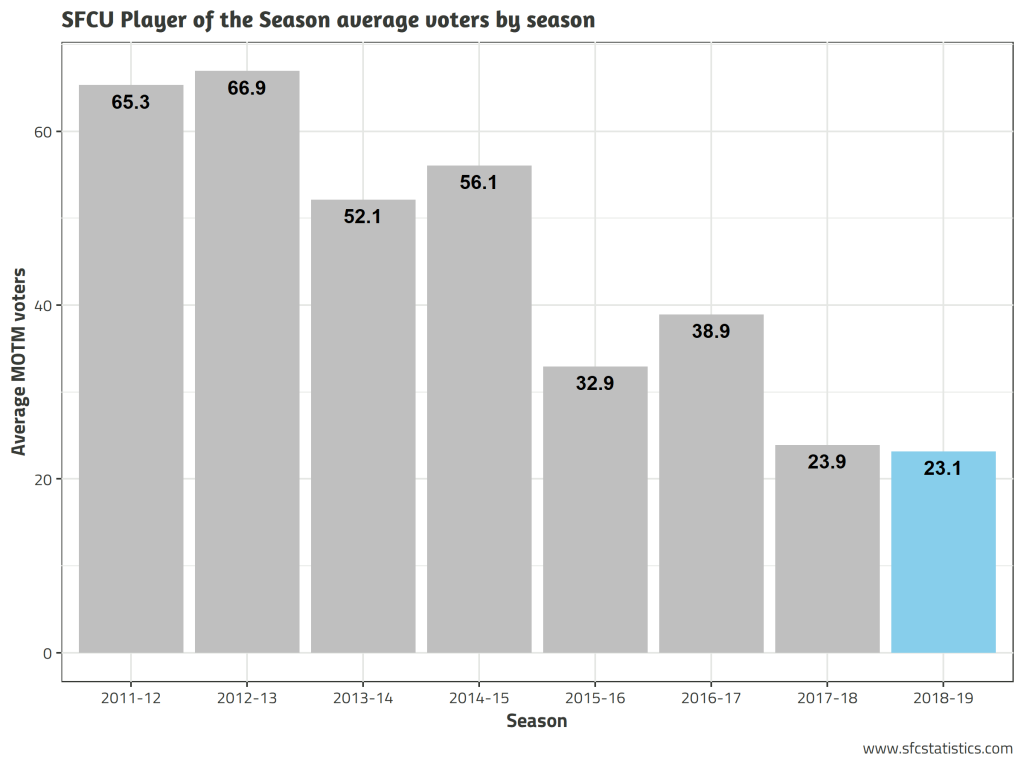 However, at least the number of votes was somewhat consistent over the course of the season. We started with a much lower baseline than previously, but fortunately did not follow such a steep downwards trend as we’ve had before. 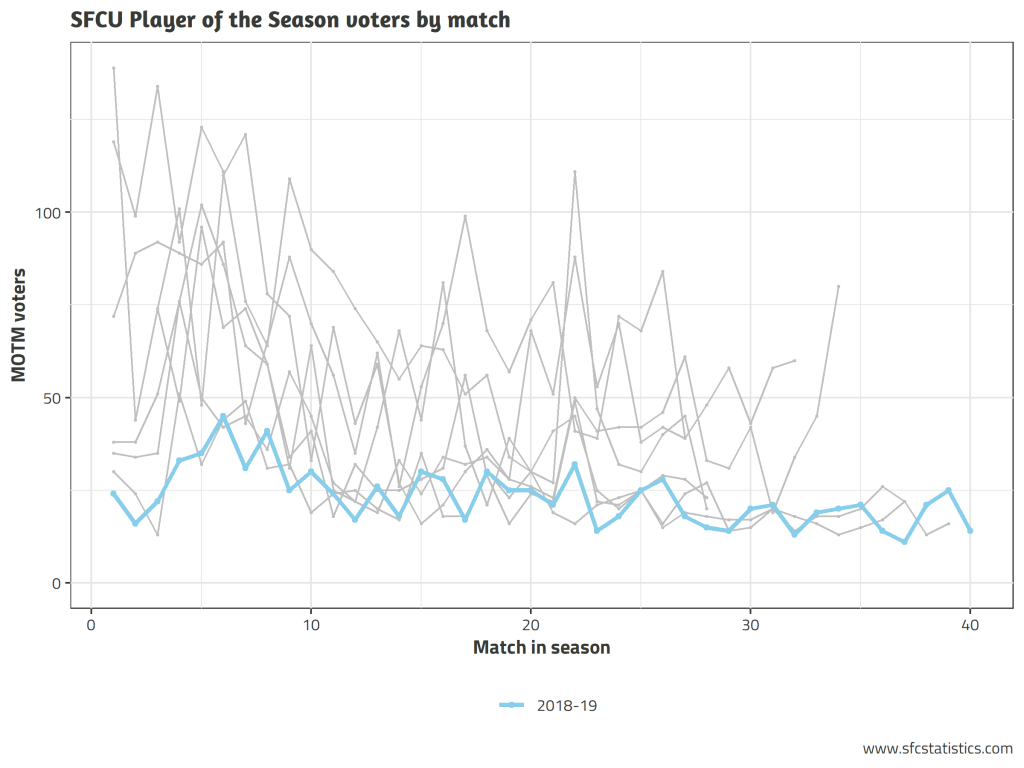 This is the downside of our voting system. It is strongest when we get a good number of votes across the whole season, but it’s tough to expect people to vote in every match, and it’s only natural that people are less inclined to do so after a disappointing loss. So at the moment our voters are probably not representative of the wider SFC fanbase, and the only way to fix that is to get more people voting regularly.

So who did this unrepresentative cabal anoint as their chosen one?

In second place was Rhyan Grant, who also had 5 MOTMs and picked up 32 points despite missing a chunk of the season while on Socceroo duty. Third spot went to goalkeeper Andrew Redmayne, who had the most MOTMs this season with 8, but not so many minor placings, seeing him finish with 30.3 points.

Fourth, fifth and sixth went to Adam Le Fondre (6 MOTMs, 28.5 points), Brandon O'Neill (4 MOTMs, 22.5 points) and Alex Brosque (4 MOTMs, 21 points) respectively. There was then a big gap back to marquee Siem De Jong (13.5 points) in seventh, while eighth-placed Paulo Retre (9.5 points) was the only player outside the top 6 to take more than one MOTM.

The full results for every match have now been released and can be seen here. Where players were tied on their points tally, they are ordered based on the number of MOTMs, then the number of second- and third-place wins, and finally the average number of votes they received across the season.

Here is a graphical display of the course of the player tallies throughout the 2018–19 season.

From quite early on, it appeared to be a two-horse race between Ninković and Le Fondre. Apart from a couple of barren periods between Round 5–8 and then 11–15, Ninko only finished outside the top 3 in consecutive matches twice, otherwise picking up points consistently throughout the season. Adam Le Fondre, who scored points in 11 of his first 15 appearances, held a 6-point lead at the half-way mark, but only scored points four more times and subsequently dropped back.

Ninković’s win continues the great record for Sydney FC’s foreign signings, who have won it in 6 of the 8 seasons, and all of the last 5: Nick Carle in 2011–12 and Vedran Janjetović in 2013–14 are the only Australians to have won this prize. Ninković has finished in the top 3 in every one of his four seasons with the club.

Andrew Redmayne’s excellent season earned him a Socceroo call-up, and as already mentioned, he had the most MOTMs across the year. He had not won an MOTM in any of his 40 appearances prior to 2018–19, but his tally of 8 is the second most for a goalkeeper in a season, surpassing Vukovic’s 2016–17 season (7 MOTMs) and behind only Janjetović’s 10 in 2013–14.

The player who was awarded the highest average number of votes in a single match6 this season was Reza Ghoochannejhad, in the Round 18 away loss to Brisbane Roar. Reza picked up 43 votes from the 14 voters, for an average of 3.07. Andrew Redmayne’s performance in the away loss to Kawasaki Frontale was remarkably similar: he was awarded 46 votes from 15 votes, also with an average of 3.07. These were the 17th and 18th “most outstanding” performances in the history of this voting. The record is held by Filip Hološko, who picked up an average of 4.53 votes in scoring a brace in another away loss to Brisbane.

The match for which voters were least decisive7 was the last regular season league match away to Newcastle. The 14 voters spread their votes across 11 players and the MOTM in the end went to debutant Joel King, who only picked up 16 votes for an average of 1.14. This is the sixth-lowest tally to have won an MOTM: that record is held by Joshua Brillante, with 0.83 in the 2017 FFA Cup win over Bankstown Berries.

Ghoochannejhad and King were two of the five players to win the MOTM on their Sydney FC debut this season, with Danny De Silva (vs Rockdale City), Adam Le Fondre (vs Avondale) and Tom Heward-Belle (vs Kawasaki) being the others. This brings to 8 the number of players to win on debut for SFC, after Alessandro Del Piero, Saša Ognenovski and Vedran Janjetović.

Finally, as well as again thanking this season’s voters, I want to say a huge thanks to the two main people who make this possible. Grant, who has run SFCU tirelessly and mostly thanklessly for years, building the community who have allowed me to run this award. And James, who did a brilliant job in setting up the voting system so that I could make it available on the front page of the site not long after each match.