Well, we knew it couldn’t last forever. But even despite the ageing squad and yet more Covid-related disruptions, I don’t think many people expected Sydney FC to crash to earth quite so hard. The team’s first finish outside the top two in six seasons saw them miss the finals altogether, with their lowest final position since 2010–11.

But before we can put it completely behind us, we must crown our Player of the Season. Luckily, to do this, we don’t need to think back to any of those matches, as the winner is determined by the contemporaneous votes submitted by SFCU members throughout the season. If you’re not familiar with the voting system, which has stayed constant throughout the 11 seasons of the award1, after each Sydney FC match, each voter allocates six points to players who featured, in any way they want.2 Voting stays open for about a week, and afterwards, the top vote-winner is announced on the SFCU forum and awarded 3 points to their season tally. The second- and third-placegetters are kept secret (until now!), earning 2 and 1 points respectively.3 The player with the highest tally at the end of the season is the winner.

Early in June, the club announced their official awards at the Sky Blue Ball. The major men’s prizes — Player of the Year and Members’ Player of the Year — both went to Anthony Cáceres. Our award is unique in that it is more transparent than the former and less prone to recall bias than the latter, so let’s see if we came to the same conclusion…

As always, the first thing to do is to is to thank everyone who submitted votes this season, without whom this award would not exist. We had 81 unique voters submit 1164 votes across the 37 competitive matches. Special thanks go to the regulars: we had four voters who voted in every single match, and another nine who only missed a single match!

On average, there was a bit of a drop in the number of voters deciding our MOTMs, which was perhaps unsurprising considering the results and the six late-night matches in our ACL hub. The good news is that it didn’t drop as low as the nadir between 2017–18 and 2019–20, and hopefully with some good results4 next season, we can get another bump. 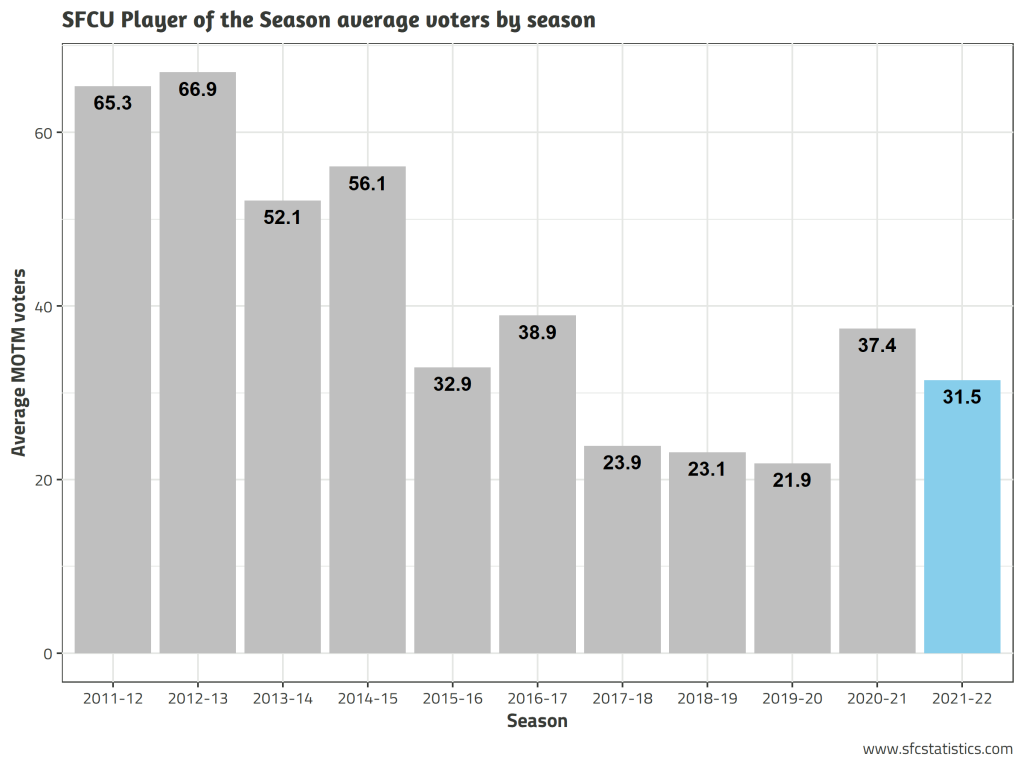 As per usual, the number of voters per match dropped off over the course of the season, albeit reasonably slowly, and never reaching the low points seen in previous years. 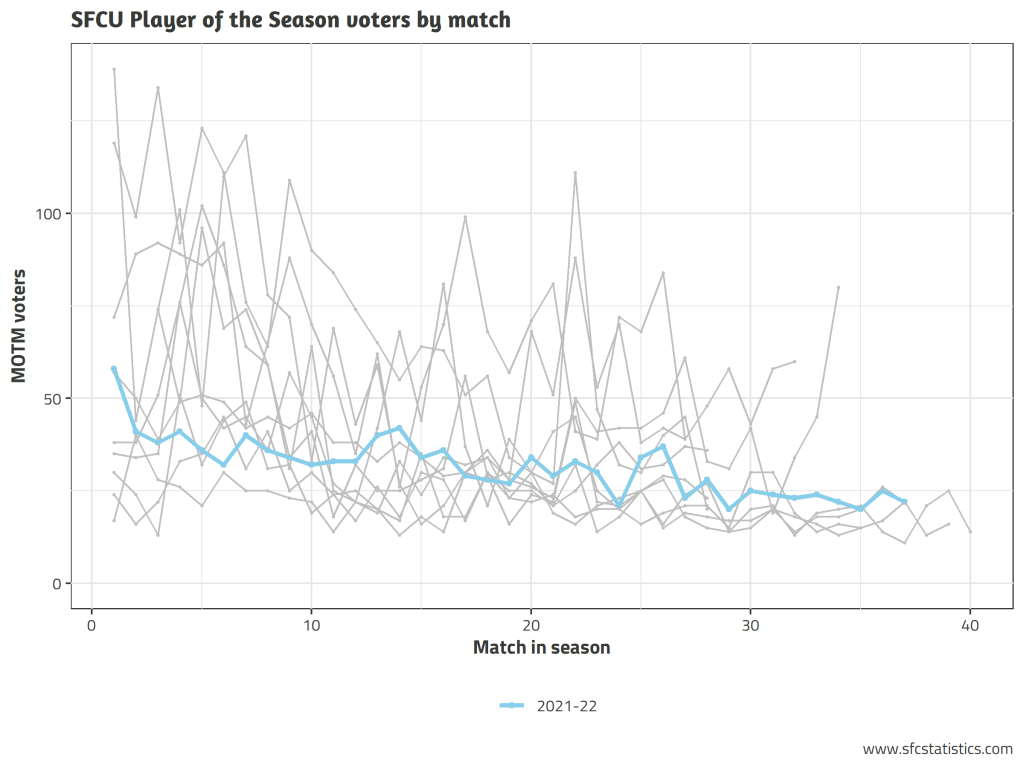 The more votes we get, the more representative the results will be of Sydney FC fans’ opinions. So please vote early and vote often, and get your friends on board too!

Anthony Cáceres is the 2021–22 SFCU Player of the Season

Cáceres ended up on 32.5 points, the exact same tally as Max Burgess. But unlike the Alex Tobin Medal,5 Cáceres’ eight Man of the Match wins6 outweighed Burgess’ six.7 Both players finished in the top three on 14 occasions, with Cáceres finishing 2nd three times and 3rd three times, and Burgess coming in 2nd seven times and 3rd once.

In third place came Elvis Kamsoba, just 2 points behind. Remarkably, Elvis picked up points in 13 of his first 14 appearances for the club, including six MOTM performances, two coming as a substitute. He played another four matches before missing ten with an MCL injury, but his early lead was so large that he was still in the frame for Player of the Season when he returned during the ACL. However, he only gained two points in his remaining six appearances8 to fall just short.

No other player earned more than three MOTMs during the season, and there was a big gap back to Patrick Yazbek in fourth place, on 19.5 points. Yaz himself only had two MOTMs, both coming after his mid-season hamstring injury. He finished in the top three another 10 times, with 4 second-places and 6 thirds. In fifth place came Mustafa Amini (15 points; 2 MOTMs), who remarkably scored points in his first 8 starts with Sydney FC, but they were typically alternated with substitute appearances, where he scored no points.

Ninth and tenth places went to Trent Buhagiar (11.5 points) and Patrick Wood (10 points), who won three MOTMs each, but not a lot else. And the SFCU Team of the Season needs a goalkeeper, so it’s lucky that Tom Heward-Belle snuck into eleventh, with his single MOTM, a second-place and two third-places9 in 10 appearances. His senior Andrew Redmayne had just a single MOTM of his own from 26 appearances and finished in 13th, behind Bobô (5 points; 1 MOTM).

Final mention to the only other player to take a MOTM this season, Harry Van Der Saag, who finished in 14th10 and Alex Wilkinson, who dropped back from his fifth-place finish last season into a lowly 15th.

The full results for every match, and the final standings can be found here.

Here is a graphical display of the course of the player tallies throughout the season. Before his injury, Elvis had a 10-point lead over Cáceres, who was clear in second place. But a great run towards in the final third of the season saw Burgess join the race. It’s a bit difficult to see from the graph, but going into the final match against Brisbane, Kamsoba and Burgess were tied on 30.5 points, and it was Cáceres’ MOTM performance that was enough to earn him the title despite Max Burgess picking up 2 points for second in that game. 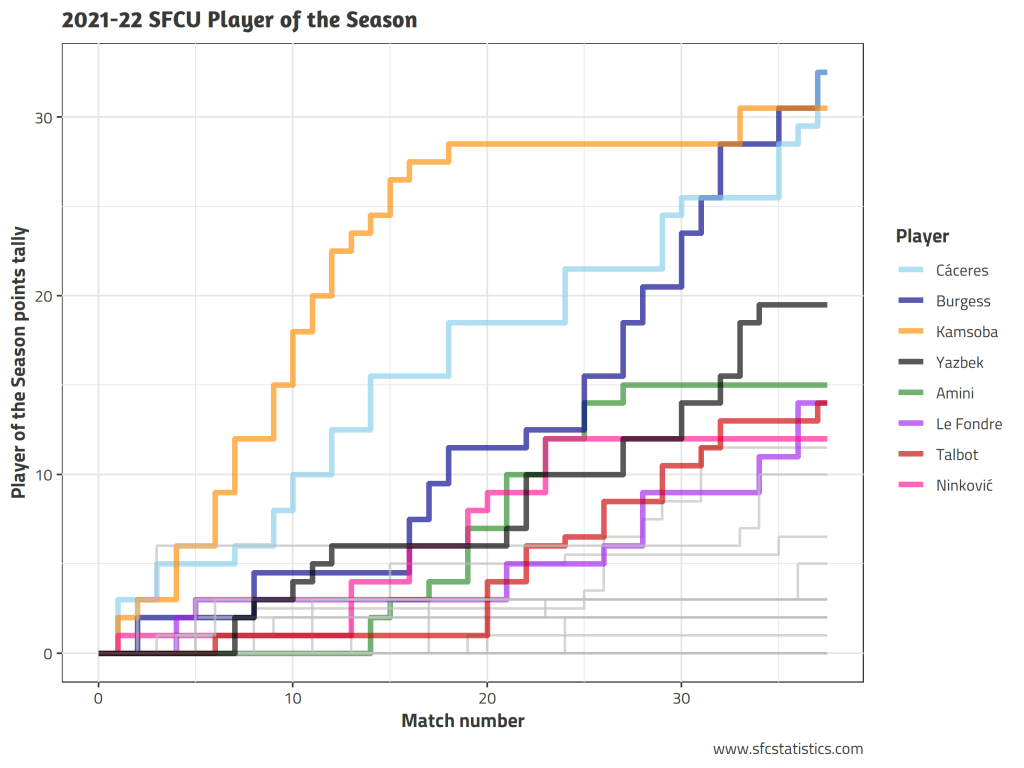 If we consider the actual number of votes they received,11 it was incredibly close between the top three, but the order agreed with the main standings. Cáceres just edged out Burgess 24.09 to 23.75, with Kamsoba less than a tenth of a vote behind, on 23.66. The following graph clearly shows the different patterns of performance throughout the season that saw them end up so close together. 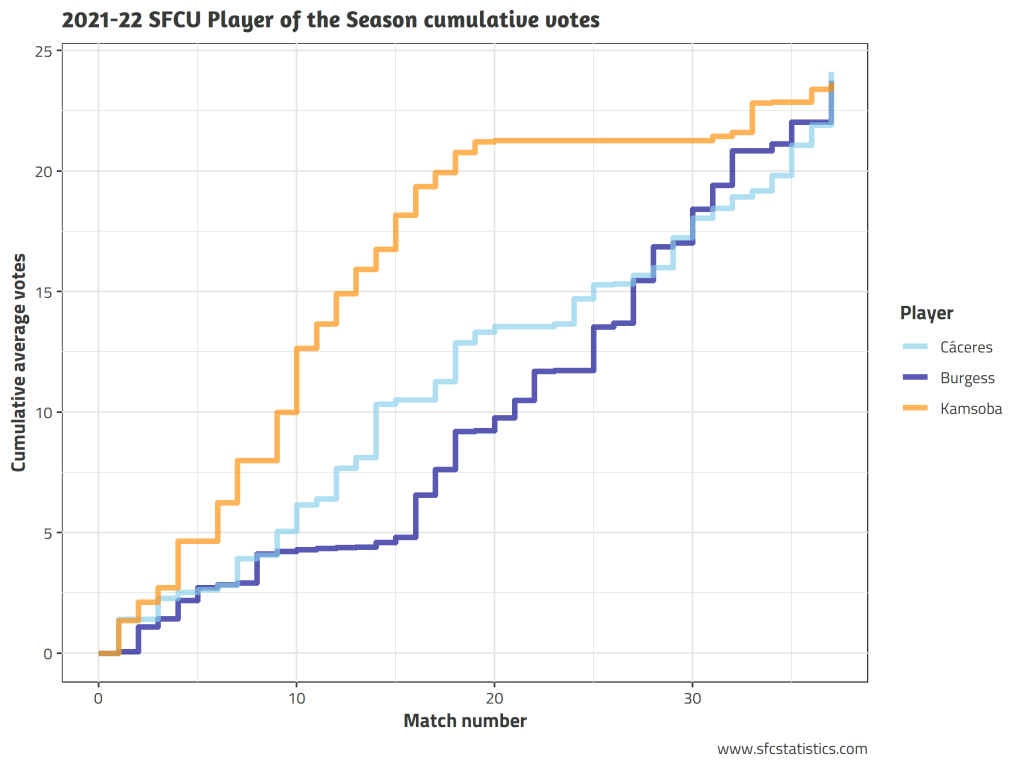 Anthony Cáceres is just the fourth Australian player in 11 seasons to win the award, and just the second (after Nick Carle in the very first season) to have been born in the country.

This season’s top three featured two players in their debut season with Sydney FC, the fourth time this has happened, after 2012–13 (Alessandro Del Piero and Vedran Janjetović, kind of12), 2015–16 (Filip Hološko and Miloš Ninković) and 2016–17 (Danny Vukovic and Bobô).

Rhyan Grant finished outside the top ten for the first time in six seasons.13 He scored just a single point, voted as the third-best player in the Round 16 loss to Melbourne City, and ended up in 20th spot.

The player who was awarded the highest average number of votes in a single match14 this season was Andrew Redmayne, in the FFA Cup semi-final loss to the Mariners. Despite conceding the penalty-that-shouldn’t-have-been, Redders picked up 106 points from the 33 voters, for an average of 3.21. That sits in 14th place on the all-time leaderboard, with Filip Hološko’s performance in a 2015–16 loss to Brisbane (4.53 average) still way out on top.

The match for which voters were least decisive15 was the dead-rubber ACL loss to Hoàng Anh Gia Lai FC. Anthony Cáceres won MOTM with just 25 votes from 20 voters, followed by Max Burgess on 18, and then just 4 votes separated third-placed Tom Heward-Belle from the following four players.

Incredibly, there were seven matches in 2021–22 in which a substitute was voted MOTM: Patrick Wood and Elvis Kamsoba did it twice each, with Bobô, Max Burgess and Trent Buhagiar also achieving the feat. No previous season had seen this occur more than three times, so it might say something about the fans’ opinions on our starting lineups this year.

Finally, thanks a lot to everyone who cast a vote this season: this obviously couldn’t happen without you. But it also couldn’t exist without Grant, the man behind the excellent SFCU community,16 and James, who set up the voting system that goes up on the front page of the site after every match.