After a strange 2019–20 season, there were some glimpses of normality in 2020–21: a few matches without crowd restrictions, finally beating the Wanderers again, Alfie and Bobô banging in goals. But things were still a bit weird (wait… Alfie and Bobô?), culminating in a Grand Final played in Victoria with Sydney-based supporters effectively locked out.

Amidst the sea of strangeness of Tuesday- and Wednesday-night Big Blues, and seeing Alex Wilkinson cop multiple yellow cards (and concede a last-minute penalty), the SFCU Player of the Season voting perhaps provided an calming island of stability. This was the 10th season that voting has been held.

The voting system has remained the same across the history of the award:1 after each Sydney FC match, members of the SFCU forum allocate six points to players who featured, in any way they want.2 Voting stays open for about a week, and afterwards, the top vote-winner is awarded 3 points to their season tally, with second- and third-places earning 2 and 1 points respectively.3 Then, obviously, the player with the highest tally at the end of the season is the winner.

As usual, the man of the match is announced after each game, but the other players in the top 3 are kept secret until the full results are revealed. In the past, this has been done at the SFCU End of Season fundraising event, but once again we’ll have to do the lockdown version: posting it online from my temporary home office on a Tuesday night in late July.

As usual, I want to thank everyone who submitted votes this season. We had 97 unique voters submit 1047 votes across the 28 competitive matches. Special thanks go to the regulars: we had 8 voters who voted in every single match, an awesome effort.

It was especially great to see a solid bump in the numbers this season. After a few low seasons, leading up to the lowest ever per-match tally in 2019–20, this season returned close to the level seen in 2016–17. We’re still a bit below the rates in the early seasons of this award, but it’s a start. 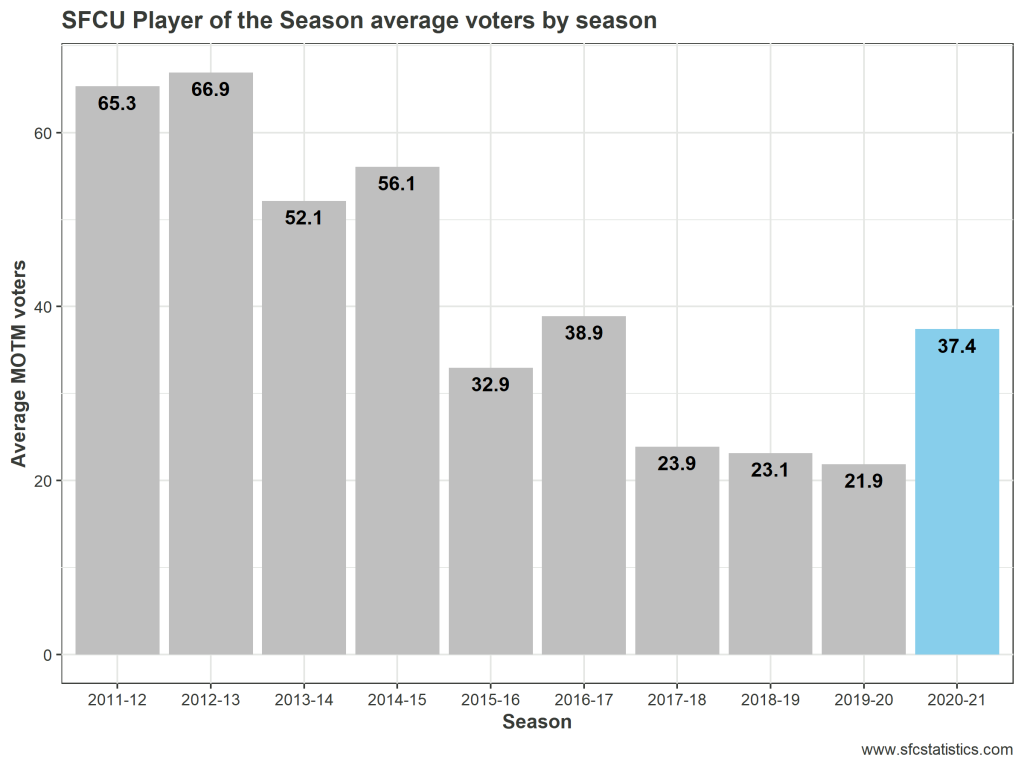 There was a little bit of a downwards trend across the course of the season, but that isn’t particularly unusual. On the upside, the numbers never fell below the lowest we’ve seen at equivalent times in previous seasons, and there was a slight uptick over the last few matches. 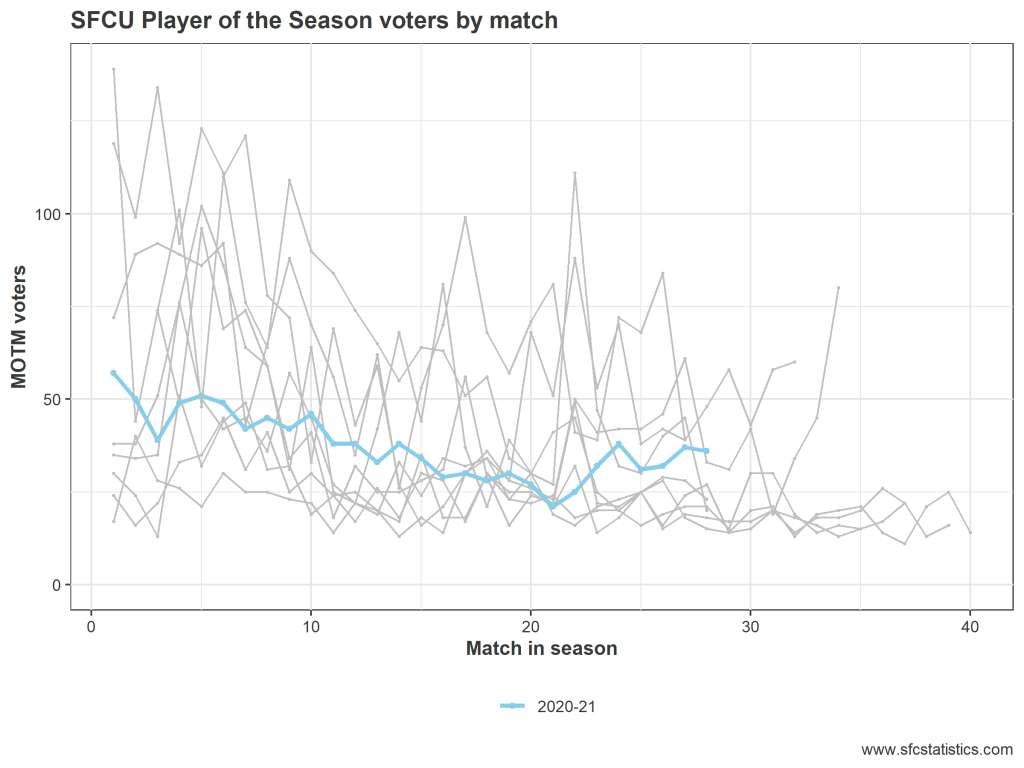 I would love to see the voting numbers grow, because more voters means that the award will be a better reflection of SFC fans’ opinions. So if you’re reading this and aren’t a regular voter (and especially if you disagree with the results), I’d encourage you to get on board next season. If you’re already a regular voter, tell your friends!

So, finally, on to the results.

Miloš Ninković is the 2020–21 SFCU Player of the Season

After just falling short behind Luke Brattan last season, Ninko took his third Player of the Season award in 2020–21, following wins in 2016–17 and 2018–19. In doing so, he continued his incredible run of finishing in the top 3 in every season since joining Sydney.

Ninković was voted Man of the Match in 9 of his 27 appearances (taking him to 40 in total), his second-highest tally of MOTMs for a season.4 He finished second a further 3 times, and came in third in 5 matches (two of which were shared), ending up with a total of 37 points.

Milos’s tally was more than twice as much as that earned by the second-placed player, Kosta Barbarouses, who ended up on 15 (3 MOTMs, 1 second, 4 third). Although the victory wasn’t technically confirmed until we found out that Sydney FC wouldn’t be competing in the ACL,5 it was the biggest gap between first and second that we’ve seen since the very first season, when Nick Carle finished well ahead of Bruno Cazarine.

But the large gap shouldn’t overshadow Barbarouses’s turn around from last season. Kosta appeared in every match in 2019–20, but was placed in the top 3 only four times, with no MOTMs and barely a vote in the second half of the season, to finish 12th overall.

Interestingly, when I put up a Twitter poll to gauge people’s opinions on Player of the Season, Brattan was the overwhelming winner over Ninko:

👀@SFCU_News Player of the Season results will be released TOMORROW 🔜 (hopefully!).

Who is your choice?

I think there is definitely an argument that this voting system doesn’t necessarily identify the best player over the course of the season. For example, a player who is 4th-best each week, behind different inconsistent players, could end up with very few points, and well down in the overall standings. But I don’t think that argument applies in this case, since Ninko was consistently in the top 3, and was ahead of Brattan in the 25 matches that they played together.

I think the fact that the Player of the Season is decided on a match-by-match basis is a positive feature, and avoids recency bias that might come with simple retrospective votes. Maybe people haven’t remembered how excellent Miloš was in the first half of the season, when the team wasn’t doing so well. One could definitely argue that matches need not be weighted equally across the year, because some matches are undoubtedly more meaningful than others, but the choice of weighting would open up another can of worms. 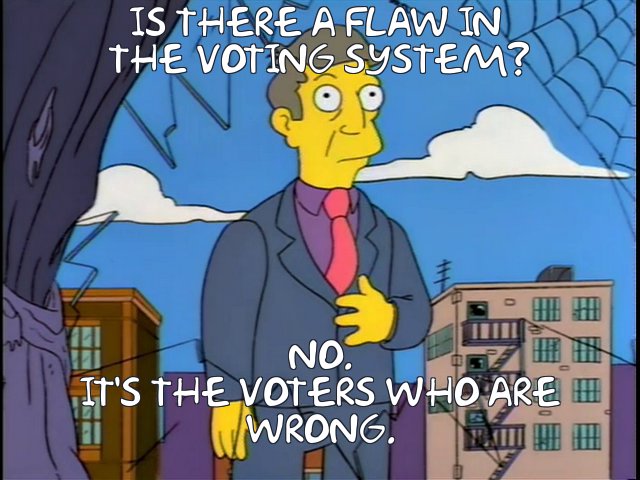 Seventh place went to Ryan McGowan (10.5 points: 2 MOTMs, 2 second, 1 third), reflecting some improved recognition for our centre halves, who were 18th and 19th overall last season, earning just half a point between them.

Final mention must go to Calem Nieuwenhof, who finished in 8th. This was one spot higher than he managed in his remarkable 2019–20 campaign, where he scored points in every one of his four appearances. Incredibly, he stretched his streak of scoring in 100% of his Sydney FC appearances to 10 matches before finally finishing outside the top 3, and it was a shame that his promising challenge for the title was ruined by injury.

Here is a graphical display of the course of the player tallies throughout the 2020–21 season. We can see Ninko taking an early lead (he was in the top 3 in 10 of the first 12 matches) that was never challenged following Nieuwenhof’s injury. A bit of a quiet period (four matches without a point!) mid-season ended with another strong streak (7 top-three finishes in 8 matches) that sealed the title. 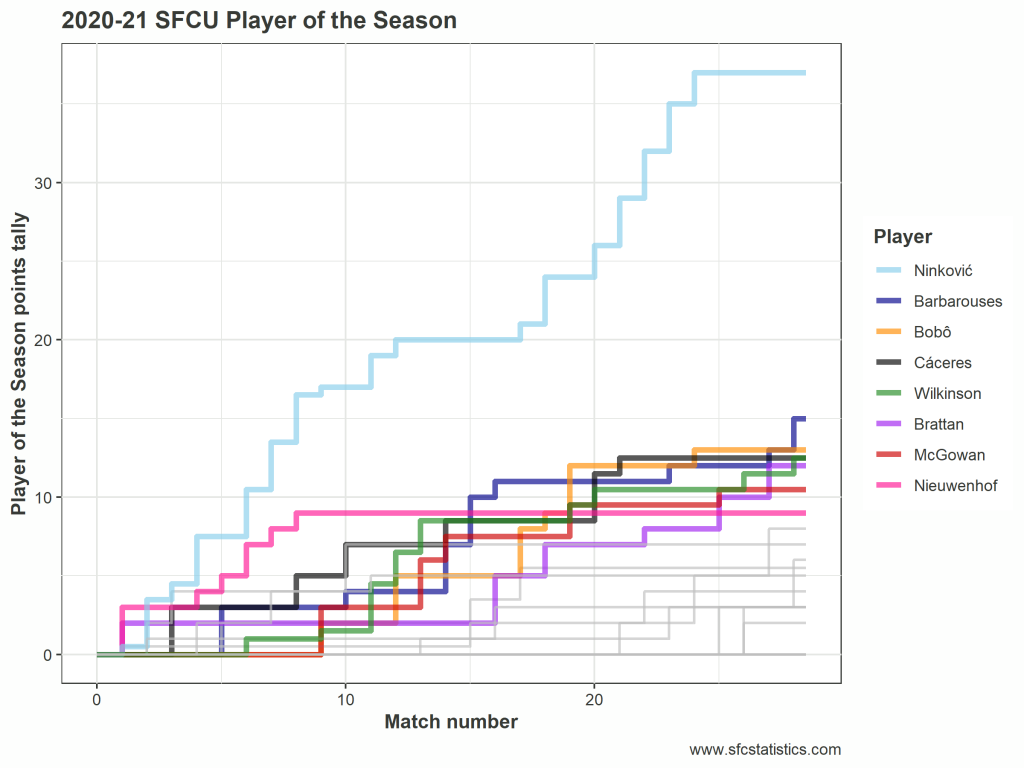 This is the seventh time that a foreign player has won the award (the ninth time for players born outside Australia), and the second time that the top 3 has been entirely composed of foreigners (after Adrian Mierzejewski, Bobô and Ninković in 2017–18). Across the 10 seasons of the award, there has been a total of 19 foreign top-three finishers.

The player who was awarded the highest average number of votes in a single match6 this season was Ryan McGowan, in the Week 14 away loss to Adelaide United. In his home town, Gowser earned 95 votes from the 33 voters, for an average of 2.88. The next highest average came from a substitute: Milos Ninković was given 118 votes by 42 voters (average 2.81) for his 35-minute cameo in the Week 9 away loss to Melbourne City.

The match for which voters were least decisive7 was the Tuesday-night home win over Melbourne Victory. Among the starters, the highest tally was 34 votes (to goalscoring MOTM, Bobô), while the lowest was 4 (for Barbarouses), and there were just six votes separating second place (Ryan McGowan, 24 votes) from sixth (Andrew Redmayne, 18 votes).

Only one Sydney FC player — Callum Talbot — made their competitive debut for the club this season, so it’s not much of a surprise that we didn’t see any debutant MOTMs or even top 3 finishes in 2020–21. It’s the first time since 2014–15 (when there were only five debutants) that this has happened.