Well, it was a long one. The 2019–20 season started in August 2019, with Sydney FC’s first ever loss in the Round of 32 in the FFA Cup. And, after a break from March to July 2020, it wrapped up in front of empty stadiums in Doha as Sydney failed to get out of their AFC Champions League group for the fifth time in six campaigns. Along the way somewhere, another couple of pieces of silverware were picked up, with the club’s third A-League double.

In keeping with the trend of 2020, Sydney FC did not hold a Sky Blue Ball this season, instead announcing their awards online on a Friday night in September,1 after the A-League season wrapped up but before we finished the ACL. The main awards there were won by Luke Brattan and Sofia Huerta, with Andrew Redmayne and Teresa Polias picking up the versions decided by members.

All that remains now — before the next season kicks off in a couple of weeks — is to announce the results of the SFCU Player of the Season award. After each Sydney FC match, members of the SFCU forum allocate six points to players who appeared in the match, in any way they want.2 Voting stays open for about a week, and afterwards, the top vote-winner is awarded 3 points to their season tally, with second- and third-places earning 2 and 1 points respectively.3 Then, obviously, the player with the highest tally at the end of the season is the winner.

2019–20 was the 9th season of SFCU Player of the Season voting. The MOTM is announced each week, but the others in the top 3 are kept secret until the full results are revealed: usually at the SFCU End of Season fundraiser. But obviously that’s not on the table this year, so a random Thursday night in December seems appropriate…

This award would not exist without the voters, so I want to start by thanking everyone who submitted votes this season. We had 87 unique voters submit 765 votes across the 35 competitive matches. Special thanks go to the regulars: we had three voters who voted in every single match, an awesome effort.

Unfortunately votes were down again on previous seasons, albeit only marginally, and probably unsurprisingly given the context. It’s a shame that our greatest period of on-field success has coincided with this downturn; hopefully I can get more interest going forwards. 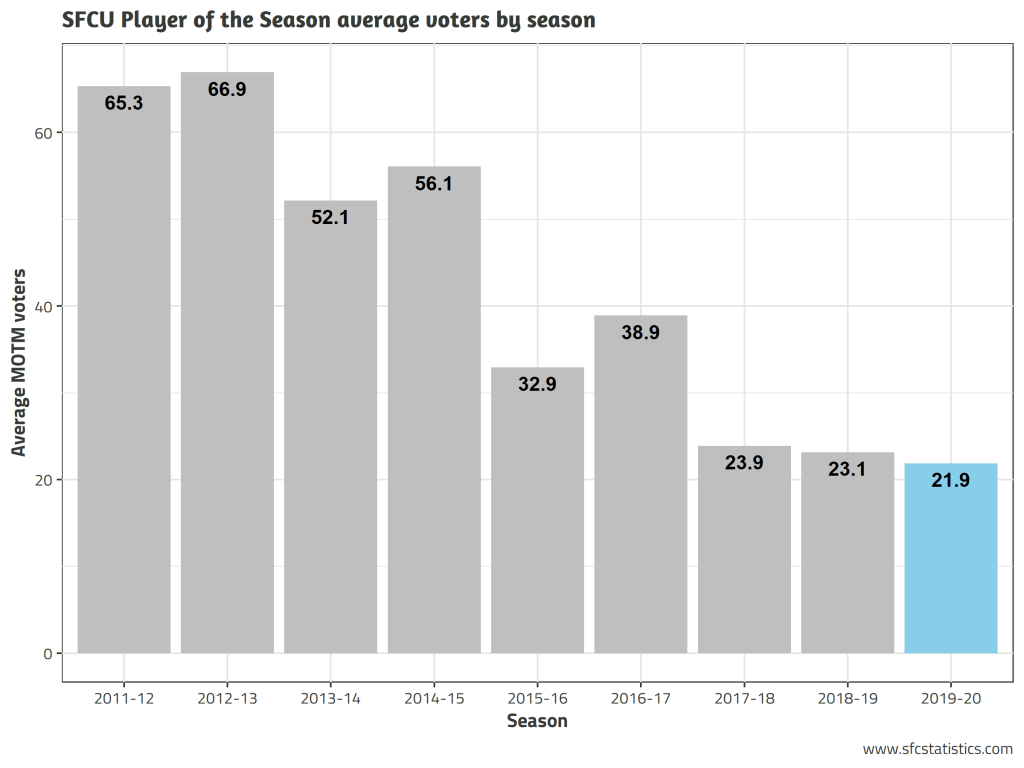 Generally, the votes stayed reasonably constant across the season, with the usual boosts for good wins or big games. There was a small jump when I announced that votes would earn a ticket in an end-of-season prize draw, although it didn’t look to be a persistent effect. The dashed line in the graph below marks the timing of the mid-season break, happily things didn’t drop off a cliff there. 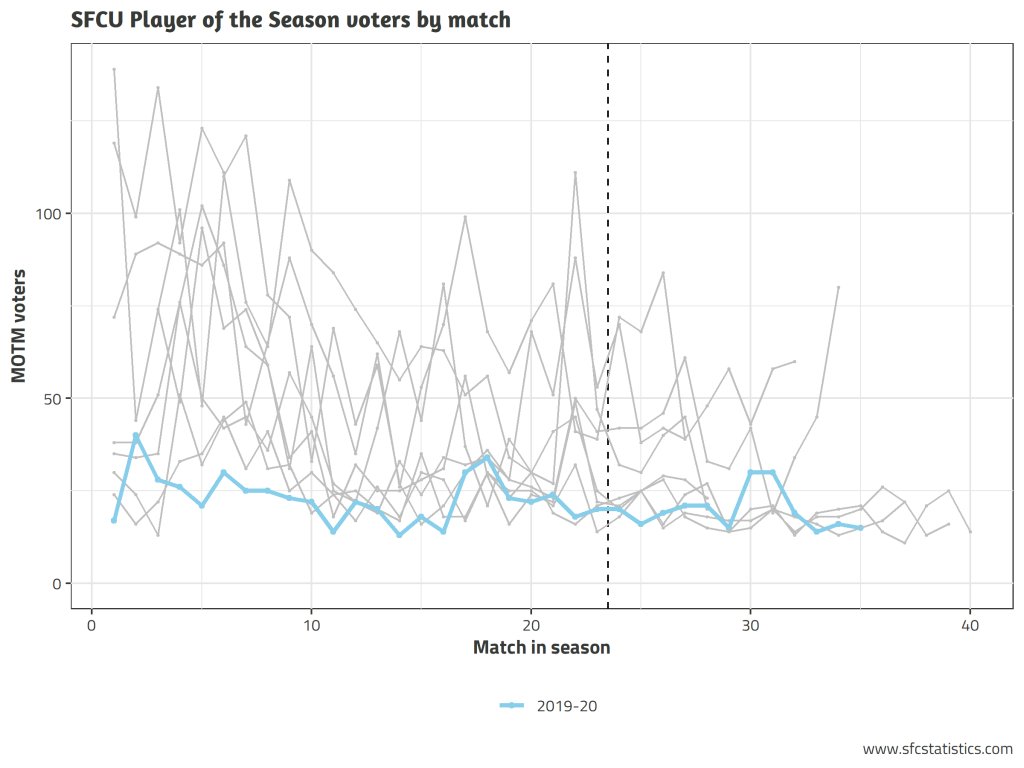 As I mentioned last season, unfortunately this means that the results of our votes aren’t as representative of the Sydney FC fanbase as they were back when we were sometimes getting in excess of 100 votes per match. The only way to fix that is to get more people voting regularly, so if you disagree with the results, there’s an easy way to change them: VOTE!

Bratts excelled in his first season with Sydney FC, picking up 8 MOTM awards, twice as many as the next player. He was also voted in second place 5 times, and third place 5 times as well, putting him in the top 3 in over half of his 31 appearances. This landed him a total of 38.5 points.

That tally is exactly the same as that earned by last season’s winner Miloš Ninković, who finished in second place this season. Ninko only picked up 3 MOTMs in 2019–20, his lowest total with Sydney FC, but he was voted second-best an amazing 10 times,4 and third place 5 times. So he ended up in the top 3 the same number of times as Brattan, but ultimately fell short by six points.

Fourth, fifth and sixth went to Alexander Baumjohann (3 MOTMs, 19.5 points), Rhyan Grant (4 MOTMs, 19 points) and Andrew Redmayne (3 MOTMs, 14.5 points) respectively. Trent Buhagiar was next, finishing half a point ahead of the man he will try to replace next season, Adam Le Fondre. Remarkably, Calem Nieuwenhof’s star turn in the ACL saw him take points in all four of his appearances, to finish ninth in the standings.

Here is a graphical display of the course of the player tallies throughout the 2019–20 season. 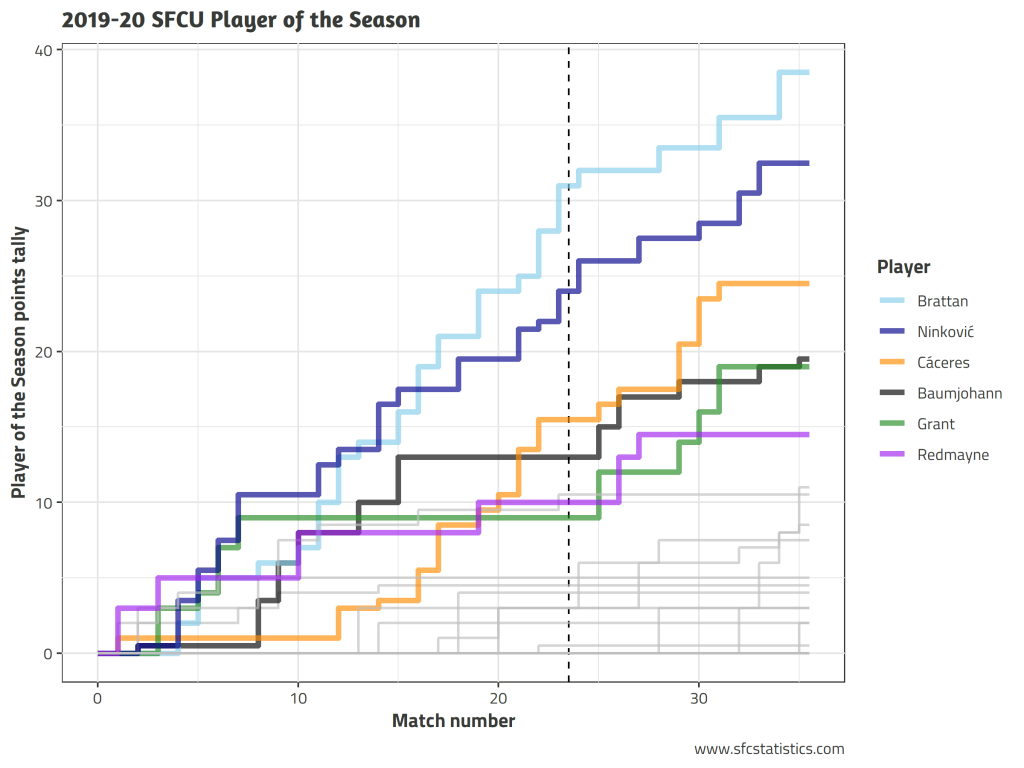 There were a lot of players in the mix in the early matches,5 before Ninković and Brattan pulled ahead. Both players consistently picked up points across the rest of the season, but Bratts picked up the bigger scores more often and stayed ahead. Ninković was actually within touching distance once it was confirmed that he was joining the ACL squad,6 and it was looking possible until Brattan’s return from injury against Shanghai SIPG sealed the deal.

Brattan becomes the fourth player to win this award in their first season with the club, after Alessandro Del Piero (2012–13), Filip Hološko (2015–16) and Adrian Mierzejewski (2017–18). He is just the third Australian to win it in the nine seasons, but the fact that he was born in England continues a remarkable trend: Nick Carle remains the only Australian-born player to win it.7

Ninković fell just short of becoming the first back-to-back winner of the award, but amazingly, he continued his streak of having finished in the top 3 in every one of his five seasons with Sydney FC.

The player who was awarded the highest average number of votes in a single match8 this season was Alexander Baumjohann, in the Round 16 away win over Melbourne Victory. ABJ picked up 60 votes from the 15 voters, for an average of 3.33. He was actually sent off in injury time of that match for a tussle with Leigh Broxham, becoming the second player to get SFCU MOTM and a red card in the same match, after Filip Hološko did it against Perth in 2015–16.

Funnily enough, the match for which voters were least decisive9 was the one before that: the Round 14 away win over Newcastle. Nine of the eleven starters got votes,10 and we saw a tie between Kosta Barbarouses and Anthony Cáceres for third place.

That was the last (half) point that Barbarouses scored for the rest of the season, in fact, he hardly got any votes after that match. Despite making 21 further appearances, starting in 18 of them, his next highest tally was only good enough for equal-fifth: an average of 0.45 votes against Western Sydney, and he didn’t pick up a single vote in 12 of those matches.

Speaking of not many points, you have to look down to 18th and 19th places to find our regular centre halves, Alex Wilkinson and Ryan McGowan. McGowan didn’t get a single top 3 placing all season, while Wilko only had one third-place finish, which he shared with Ninković and so only got half-a-point for his season tally. It’s a big drop from his tallies of 9 (2016–17, 7th), 16.8 (2017–18, 4th) and 6.3 (2018–19, 9th), but the captain can probably feel a little unlucky: he got the fourth-most votes on 9 occasions, and the fifth-most a further 9 times, just missing out on points.

We only had one player win MOTM on their Sydney FC debut this season,11 Calem Nieuwenhof becoming the ninth player to do so, after Vedran Janjetović, Alessandro Del Piero, Saša Ognenovski, Tom Heward-Belle, Danny De Silva, Adam Le Fondre, Joel King and Reza Ghoochannejhad. He actually won it again in his second appearance, joining ADP12 and Ogmonster in an exclusive club.